What makes for a good trip or proper travel is not checking off a list of places to see with their associated objects;

It is absorbing the feel of a place, ambience of scents, sounds..In taking time to do this, one notices how others live their lives & what is important to them. It also allows for a deeper memory retention of the entire experience which then adds to the “you”. It is what is actually meant by “Travel broadens the mind”.

For artists there is even more of a potential benefit.

Every artists works & travels differently. I am always “working” regardless of where I am in the world. The only variation is what equipment I am utilizing. Short trips will find me leaving the paints at home, filling my coat pocket with my trusty pocket pads as I like to travel as light as possible and most likely would not have time anyways.

Any give place should effect an artist. Not in the most obvious way such as “I am in London, I painted Big Ben”.

It is ambient light, the lines of architecture, they become further accoutrements to the palette. It does not mean that one enters artistic phases ala Picasso and Cubism et al. Rather, work done in one place  does not look exactly as it appears back home. The artists voice is ever present but there are different components to the fore, mixed in with some of the more familiar.

If you have never been or only as part of a tour group, then every place in France is lumped in together. Despite some commonalities, each area is distinctive with their own cuisine and habits. It is the same with the ambient light.

Aix-en-Provence is all beautiful yellows punctuated by bursts of trees and the sounds of fountains. Lyon is soft pinks as if the buildings are made or at least coated with the delicate charcuterie which they are the masters of making. Paris in itself is diverse. From arrondissement to arrondissement, from the Left Bank to the Right .

People, myself included, proudly proclaim themselves of their side of the river and which number arrondissement.

I like even some of the seemingly “ugly” streets with their time worn dirty gray and fatigued creams. These areas tend to be where some of my artistic heroes lived, cheap rent and every third door a no nonsense bar having been the draw.

I like working with colored pencils on gray or brown paper. I limit my palette intentionally as a challenge to myself. Getting the effects that I want in this way makes it “easier” when using paints. Although I use mainly pinks, it is realistic in that in the real world there are seemingly limitless colors but go out on street  look at buildings and the street. On encounters a fairly limited palette.

These pinks, urban children of Fauvists, remind me of some parts of Paris. Not that this color is found there but it is same effect, translated in my minds eye. This little corner I continue to pass almost daily. It has been there forever and i do not think it ever had any straight lines about it.

I initially encountered it when staying at my first great apartment. It was en route to my groceries and favorite bars. Four floors, impossibly winding stairs that made you drag your shoulder against the wall as you ascended since the light was always broken. The biggest part of the place was the bathroom, with a large old tub, frosted glass windows which opened up onto a shadowy verdant courtyard with its cracked flagstones. I kept the primitive hi fi in the bathroom doorway since it was connected to the bedroom. Only music with a minimal of voices sounded good as it was a mono player. Mostly Zoot Sims duets and Lester Young trios.The neighbors would lean against their window boxes of geraniums smoking and slowly nodding their heads to the music. Dark silhouettes with one wavering orange eye-dot that would flare with inhalation.

Hard work and I was fortunate to be able to trade up apartments. I remained in my neighborhood just moving a few streets down. The building has become one of the visual shorthand for the deep affection that I hold for the every day in Paris and those first exciting years. 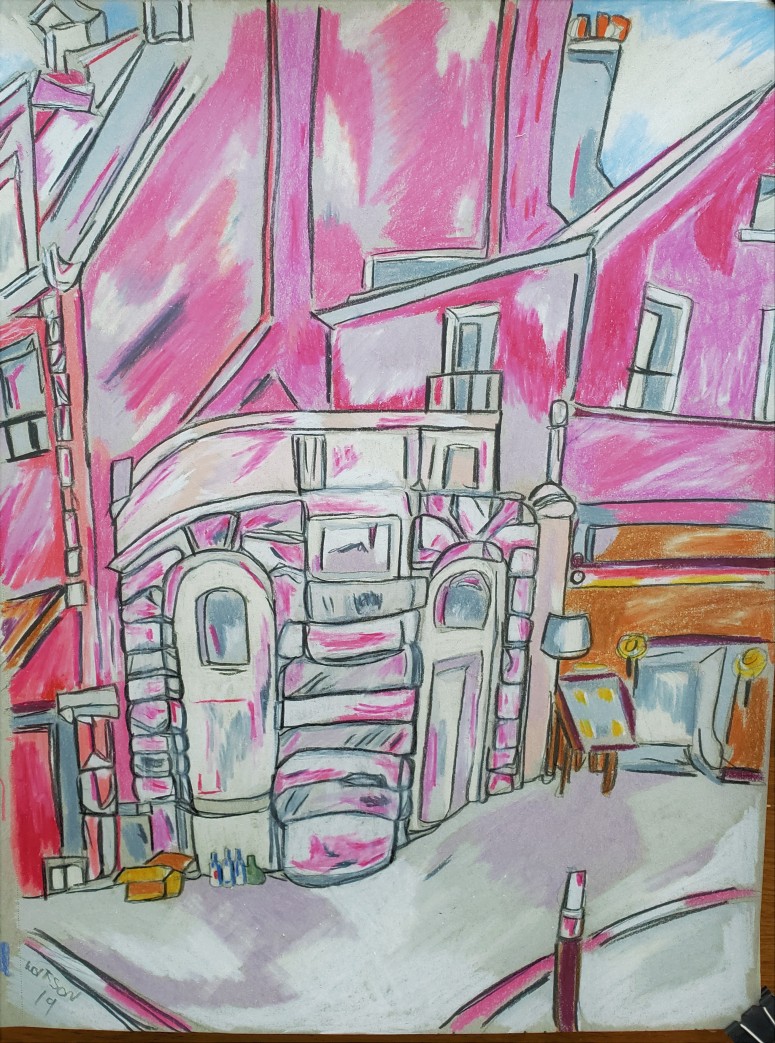