This is the second piece in a series.

Watercolor & French cotton paper 7×10
The size I choose for my works is intentional. I want the viewer to feel as if ease dropping on a scene.

As important to me is the new or first time collector.
Art collecting has become for the average citizen nearly unobtainable. This is because of a pervading bigger is better mentality. Not all people have gallery like wall space to work with. I keep in mind the apartment dwellers and first time art investors.

Space aside, burgeoning collectors are just starting to form their taste. A large piece runs the risk of informing the aesthetics of what to collect. I want my audience to live with my work, not under it. 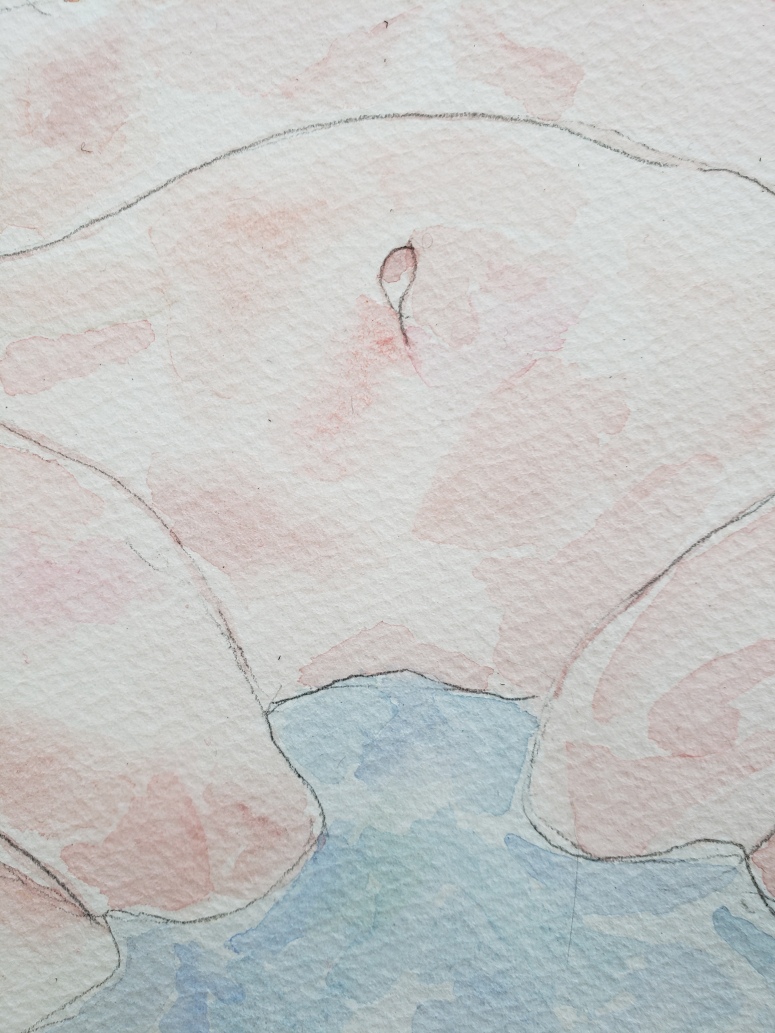 After painting for a few years and garnering some chops, i notice that while my voice is ever present in my work(s) different paper have their own inherent properties. The characteristics each paper brings to a piece is akin to a spice intentionally added to a dish for a desired effect.

Here are two pieces I did in same week:

I like my pieces to exude the feeling that one is a voyeur into a scene. I try to not rigidly state what the viewer is seeing. Pleasure, pain, either or so long as emotion is present. 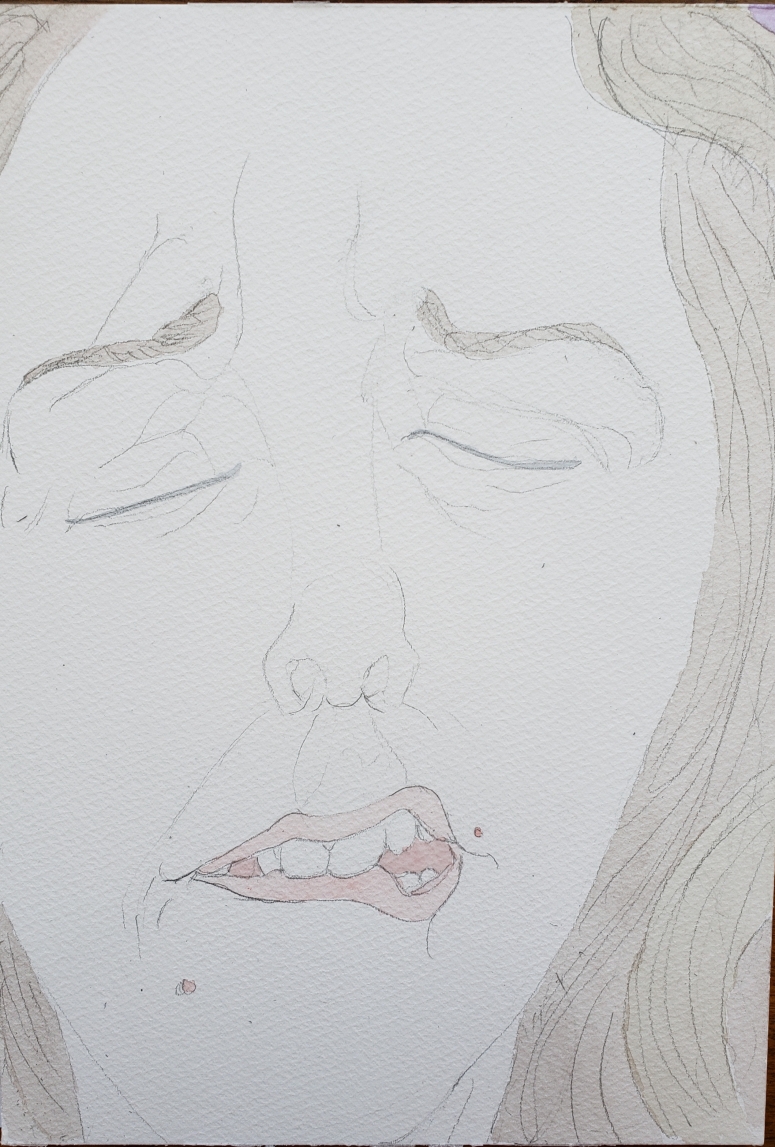 There is a pleasure to exploring when on the road. A different but equally satisfying thing is to have places all over the world where one is known, a regular. This is a self portrait of me at one of my favorite places while on the road. 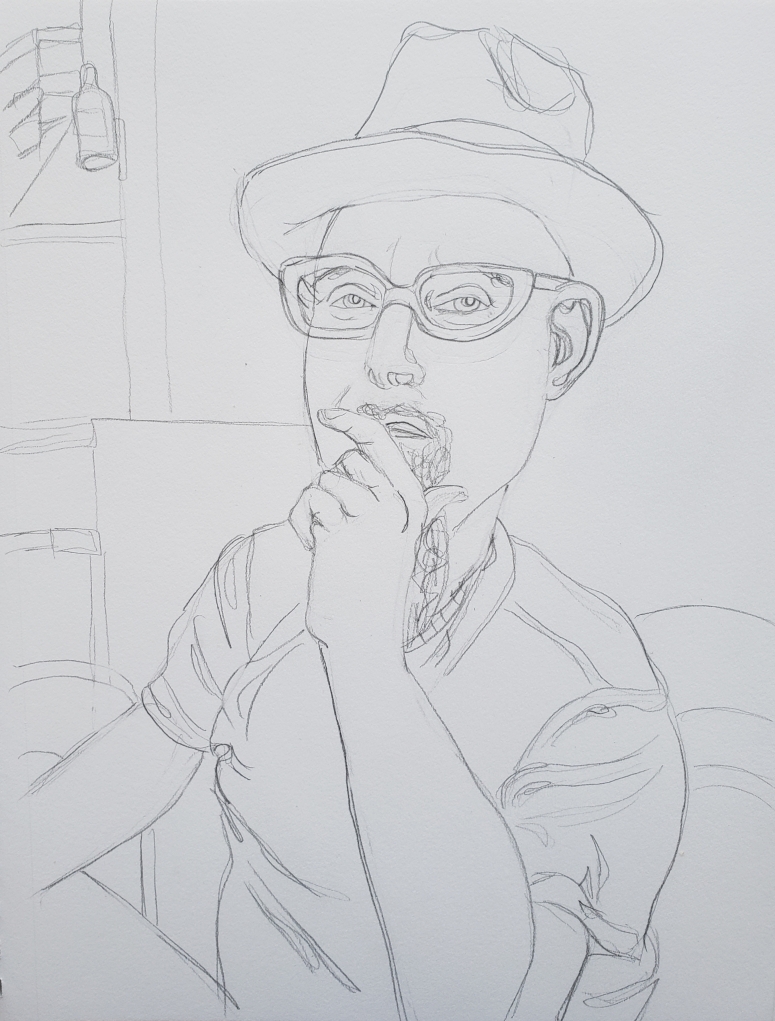 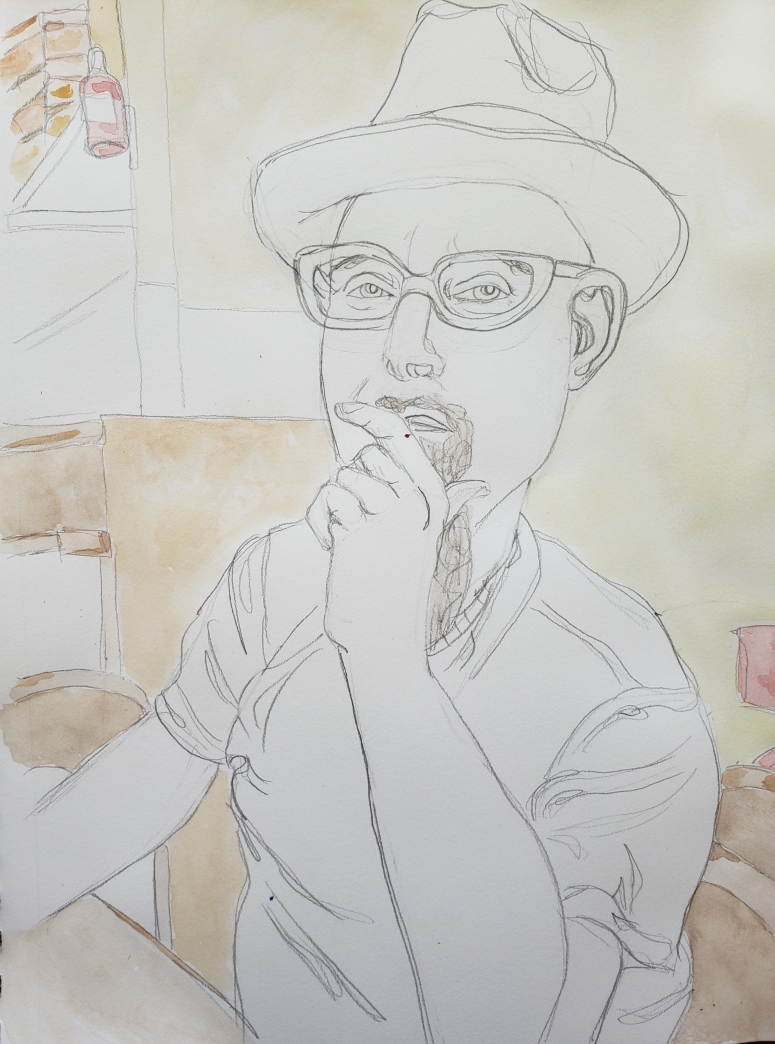 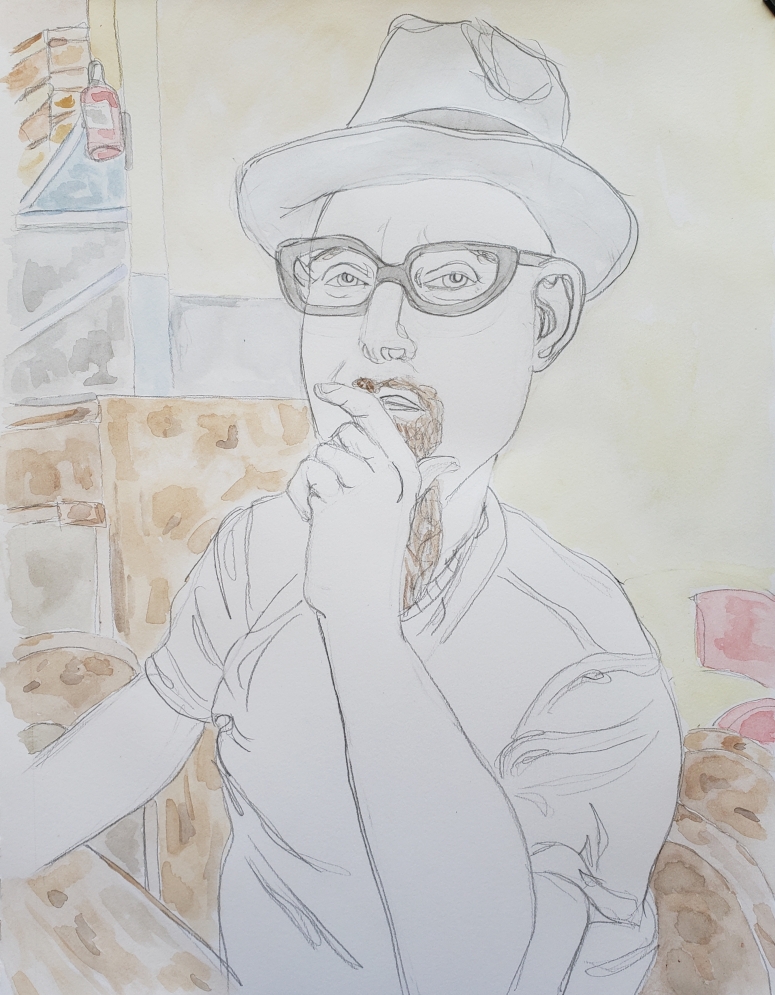 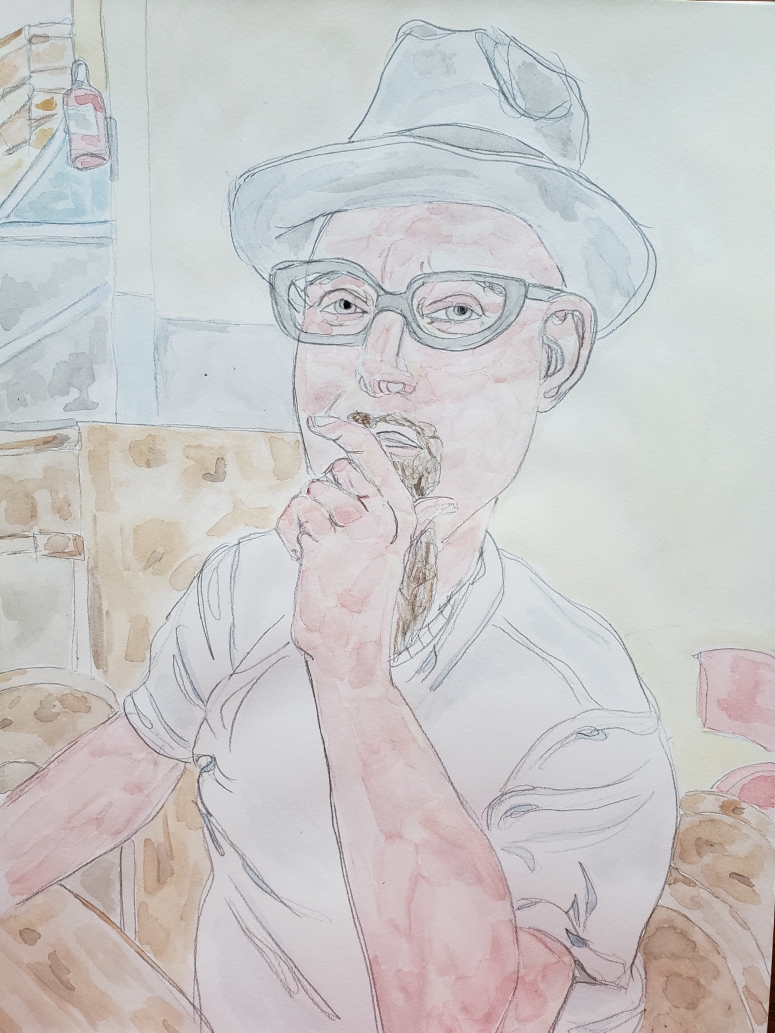 I used to do large paintings, acrylic on canvas. Door sized things. I was not very good at the time and I sometimes think the real art was in the making of the pieces as I often had an audience. Everyone liked the works but I think it was being caught up in the moment or after the fact, remembering the time.

I got serious about painting, I got good. I am far better with watercolors than I ever was with acrylics. I got rid of 95% of my old works.

My paintings and drawing tend to be far smaller now. my largest graphite pieces are 9×12 with the paintings being 7×10. (more often than not 5.5×8.5)

I have a logic to this. I want the viewer to feel as if ease-dropping in on whatever scene I am putting forth. As important as the emotional effect, i have the first time or new collector’s in mind.

When  first getting into art there is a vague sense of what one likes. The more you delve into art, the more exposure you have, the palate becomes fuller formed. To get one of the larger pieces so en vogue when first starting out, you run the risk of it dictating the timber of a burgeoning collection.

I want a collector to live with my works, not under them. For people where space is at a premium, the now seemingly typical big-boys dominate a room. The real big pieces, you have to almost put goggles over the mind’s eye, you stop noticing it except for rare instances and this defeats the purpose of having art.

With my now firmly established voice, I have no idea if my technique would even work with large pieces. As a challenge for myself I have decided to do a few larger (for me) pieces. Regardless of whether I can make it work, I still do not see myself going as big as is popular. Bigger is not better it is just “more”.

This is my first “big” piece. 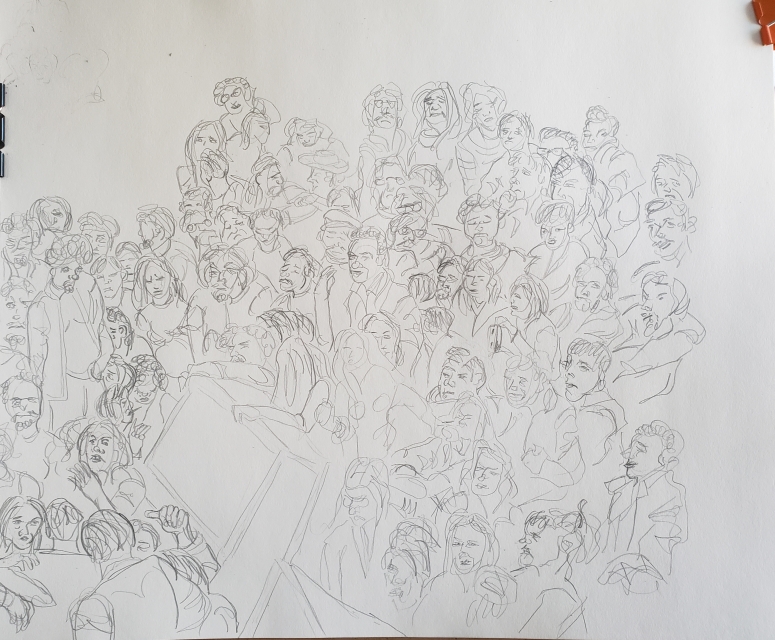 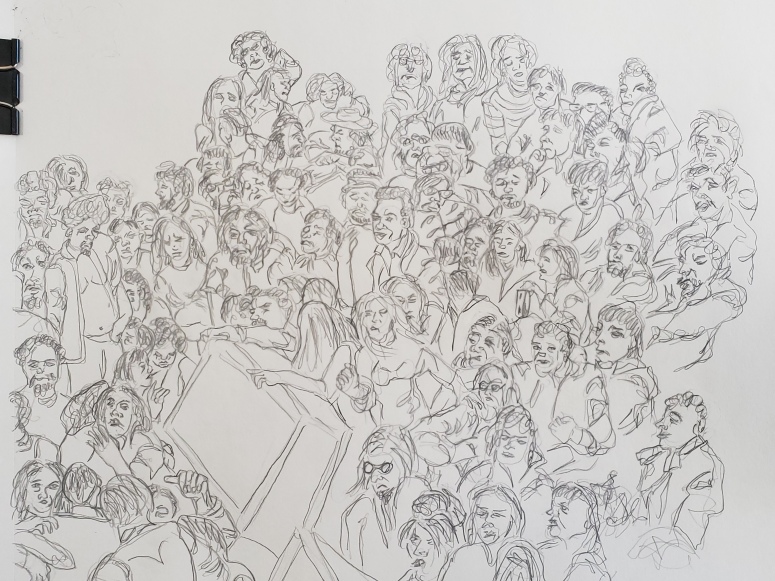 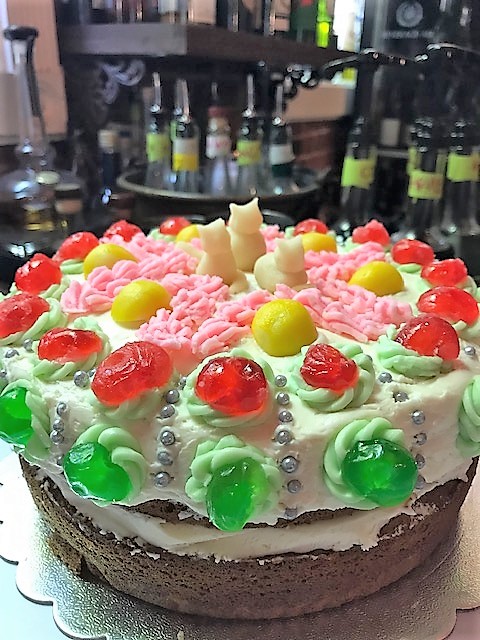 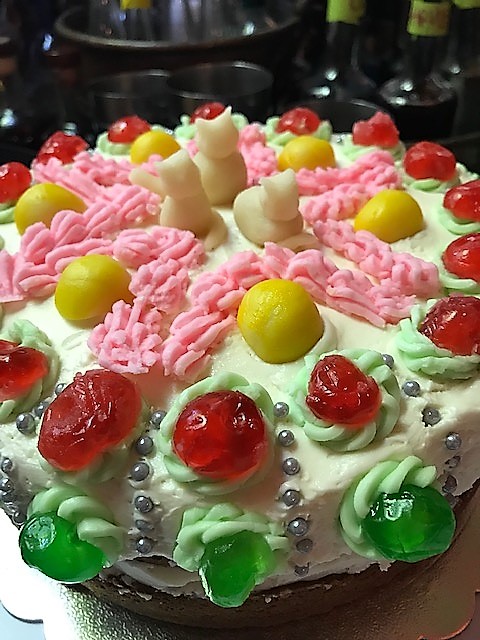 Renaissance painters largely did Royal/High Society  portraits along with the obligatory religious work. It was important for the portraiture to look like the subject. However, there could be subtext either positive or negative in the clothes the subject was wearing, the accoutrements around them.  These send their own narrative out into the world.

The painter locked in the subject’s position, then worked from there. Now, with camera/photos, people expect, if the subject is leaning their head to the left, then paint it exactly that way.

I have often written about the relationship between artist & model and audience expectation. Another aspect which has changed is positioning.

I want my portraits to look like the subject and I include every little bit of minutia that I see, from a blemish to an about to fall off button. when not working from a live subject, I do not rigidly adhere though, to position offered up in the photo .

Once I did a commission, working from a photo. When I was done, it was the spitting image.

“Oh, my head had been tilted back slightly more in the photo.”

It had not been a flattering angle, chosen because it decreased a chin but increased nostrils as focal point. A strange argument to me, as angle aside, it looked just like her. Most people would never see both the photo and the portrait.

Not by way of excuse but as part of my usual modus operandi, I do sometimes slightly alter an angle. It is as if I am capturing the moment before or right after that in the photo. Depending upon the naturalness of the pose, at other times I do not alter a thing.

She took possession of the portrait. Upon hanging it in her home, she snapped at photo of it on the wall. At one of the fuller cocktail parties she faux-casually brought up her portrait. Wanting some justification for her initial cool reaction she had been eager to show a party goer or two  the photo I had worked from and the finished portrait both of which rested within her phone.

“Oh, that is great, it looks just like you, especially in the eyes!”

After a few more comments like this, she felt better. She put away the photos of twins, born a minute apart.