It was magical in that the rain held out every day, aside from minor flare ups, until I was home for the night. I would lay in bed and see the lights of other people’s home’s flicker through the sheets of heavy Parisian rain. The steady rhythmic sound as it hit the zinc tiles made music unnecessary.

I was reading Harold Bloom’s “Falstaff Give Me Life”. A meditation upon the character & literature. Some of his pronouncements (in general) are controversial but he always walks the reader through his thought process. Unlike a lot of essayists of later generations, he does not insist he is correct because it is how he feels but instead presents evidence cited to back up opinion.

Of course personal taste enters into it too. I confess some works of which he is passionate about do nothing for me. The mark of a great thinker and essayist, I am still interested to read what he has to say.

For me, Shakespeare is not the same end-all-be-all. I prefer my Greeks & Romans. It did prompt me to revisit the bard and also the Verdi Opera. (In the book he mentions the opera, making a specific point of  “that Falstaff not being the one written about”.

I got more enjoyment from revisting the bard. I already owned the opera, bought originally solely because Bryn Terfel was in title role. I delved into it again and found I enjoyed it much more than at the time of my original purchase, now listening to it at least once a week.

Falstaff, just under the surface of his merriment can be glimpsed a bent to self sabotage or a fatal purity, to not play the game of politics & ambition but rather stay true to himself via  appetite. Appetite that is not always to be satiated but the attempt to do so being the best way to honor & live life.

It all makes for some great base material of art in any medium. Here are some quick sketches, riffing upon the theme. 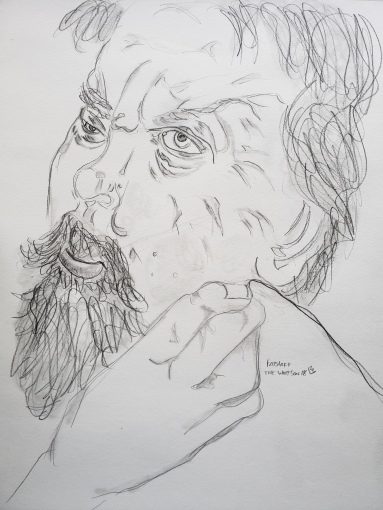