Sometimes with my paintings I will do a piece where the viewer is only seeing a part of the subject(s). Just a torso, an arm, a breast, freckled forehead or knee.

There is the interesting dichotomy of the viewer only getting part of a piece, a close up, of a larger scene. Yet these pieces of larger going ons are fully realized works unto themselves. There is no need to see what the hand attached to the arm is doing or where the head not visible is resting.

The point & challenge of this is to have the emotion(s) come through to the viewer, conveyed only by the part(s) seen. By emotions I do not necessarily mean the subject is upset so hence, an angry arm. Rather, by emotion, I mean the viewer feeling something despite not being clued in by the usual facial or body language clues. The fact that there is no obvious programmatic aspect  allows for each viewer to put their own emotional resonance into it.

This piece is 9×12 watercolor on multi media paper. The couple were celebrating their anniversary and birthdays (50’s) which fell around the same time. Initially, I had no idea what they were going to have me paint. In their pose is not an acceptance or giving in to age but rather an earned knowledge & strength. To hear them talk, as you get older, all the superficial illusions drop away, certain ego driven worries do not distract nor hold one back any longer from ambitions towards different enjoyments. 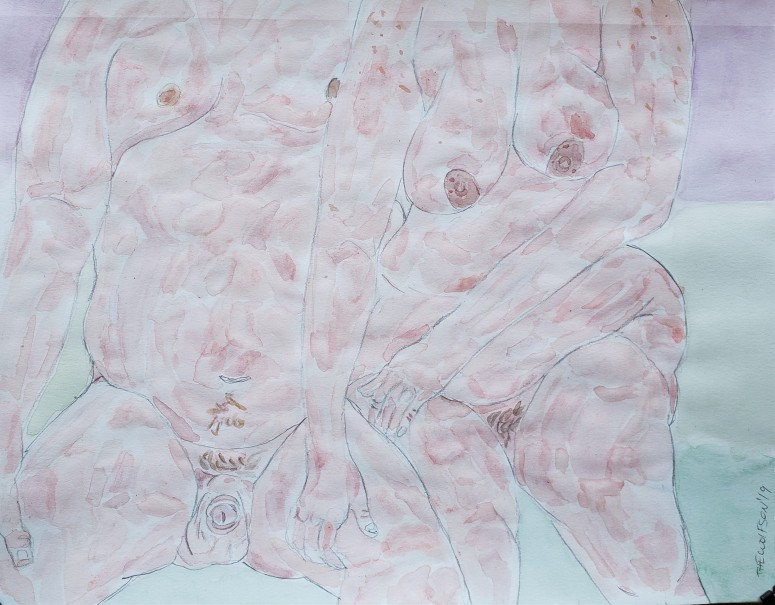