Getting on plane tomorrow so here are some quick sketches and thoughts in between closing up stateside studio:

I just finished the biography on Alexander Calder by Jed Perl. I had not been into Calder beforehand but developed a new appreciation for him after finishing. I have shelves of books on biographies/histories of Paris during different eras which include all the artists that where then on the scene.

For modern art eras, Calder was often featured. He was portrayed in a sort of often parroted shorthand, as an impish figure who artists in all the various movements liked (surrealists, futurists, cubists et al) even though he was never formally a member of anything.

Marcel Duchamp too was embraced by key figures in many movements which he purposely never joined. Duchamp had the glamour of enigma and an obvious influence to varying degrees on many artists who came after him for generations.

After reading this wonderful book the two had more in common than would be apparent from other books. Duchamp’s mien was always sphinx like which lent a sort of gravitas to whatever he was doing.  Calder was serious about his work but had a joyous disposition. If he did not get along with somebody, then he just did not bother with them. He had artistic theories & philosophy but he was reticent and never pontificated about  them. This lent a sort of playful veneer to all that he did to casual gallery & museum goers. There was a joy to what he did, but a serious joy.

This is the second book I have read by Perl on an artist to whom I was initially indifferent. It underscores that no matter how much one knows about art or how well formed their aesthetic sense, there is always room for more exploration and to pull new things into oneself.  And as I have often said, with certain non-fiction authors, it is well worth reading anything that they put out. Jed Perl definitely falls into this category. 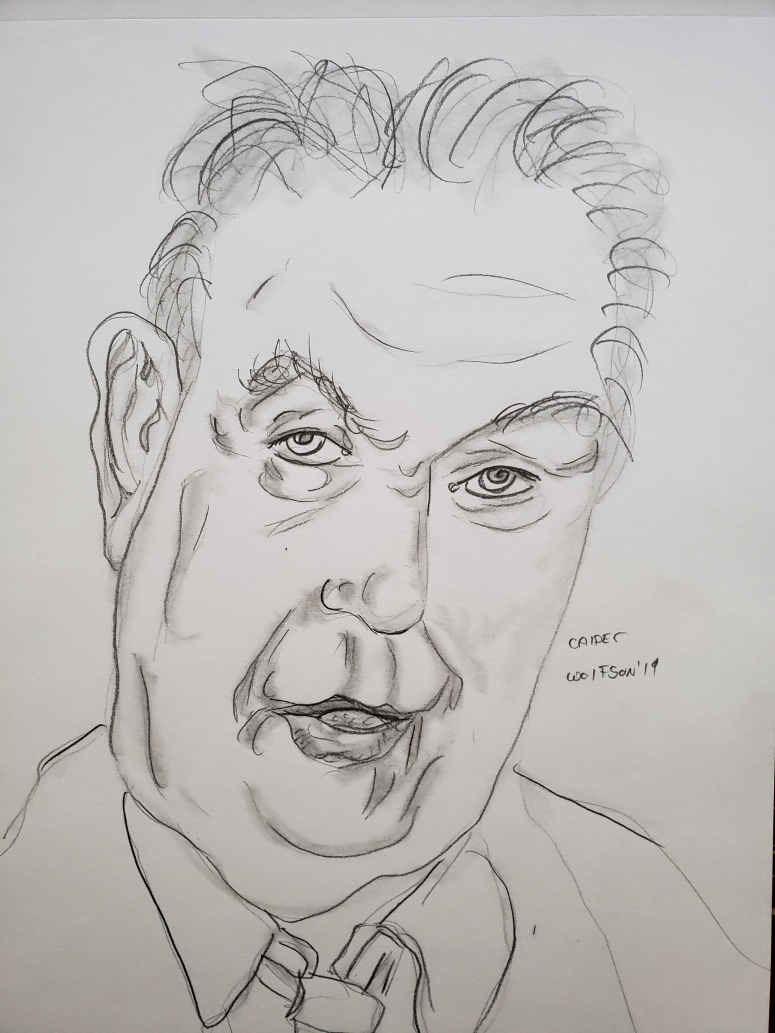 It was just Duke Ellington’s birthday.  To people not well versed in jazz Duke Ellington is “Take the  A Train” or that sort of sludge of sound behind really old cartoons which utilized swing music before Carl Stalling came on the scene with his innovative sonic madness.

There was always forward thinking elements to what Duke & his orchestra were doing. He was constantly evolving and adding to his vision and sonic palette.

He composed in so many forms that it’s bittersweet to think of the years where he was lumped in with other, mere entertainers. Publicly, he never seemed to complain about this. In his final decade or so when he was starting to truly get his due,  in performance he still would often include medleys of the hits as to please the crowd. Remnants of when  this  American Mozart, despite his skill land ambition had to set toes to tapping.

For beginners to his oeuvre the best place to start are his later recordings. These works are more easily acceptable to someone  used to post bop jazz (used to be called “Modern” ). In his final years, Duke seemed to be allowed to record whatever he wanted. It runs the gambit in diversity. From Tone poems to suites, to soundtracks to trios and sacred concerts to teaming up with musicians young and old that he admired but had not worked with in small ensembles (John Coltrane, Coleman Hawkins, Louis Armstrong)

I first got into his work by delving into the later stuff. I enjoyed that so much i started looking backwards. Years ago I would not have been open to it, but now i treasure all Duke.

There is probably at least one of his albums to fit no matter where you are in the world and what you are doing. All around the globe, my pencil in hand and the rich coloration as envisioned by Duke wafting up out of the speakers.

Anytime one sees Paris on television or in the movies, as a character passes by a window or stops in front of one to gaze out and ponder some plot point, the Eiffel tower can be seen.

More often than not, this is not geographically accurate for where the action is taking place.

That aside, not a bad view to be sure. But I think there are more inspiring views which would have less ambient noise of tourists etc which can distract from living one’s life (working) in the city of lights.

Year after year I live in the same place, same arrondissement, in Paris. It is  a working neighborhood, meaning no tourists.

However, every other door which is not a residance seems to be a bar or boulangerie.

I am ten minute walk from places to sketch like the Luxembourg gardens.

I have, after all these years become a part of my neighborhood.

When I am elsewhere in the world, I dream of being back. I have decades long relationship with my wine merchant, butcher, greengrocer and baker.

There is established level of comfortability that I know I can sit in a bar sketching on the sly and not be perceived akin to one of those people with their laptops “writing” to be found in every Starbucks stateside.

It kept raining off and on…steady rain would be all right people would click clack down the wet cobblestone streets holding a newspaper or their jacket, cape like, over their heads.

Sporadic rain, it got humid. Clothes got wet, then you find yourself cold, followed by a type of sticky as body heat working over time dries away the rain.

Stop-start of the skies festivities,  people are just staying wherever they are at.

I am in one of the little intimate bars which despite my now having a studio, serves as an unofficial office.

There is a tall brown haired girl sitting alone at the bar. She wears a still wet dress whose true color is slowly being revealed as it dries.

I am at my usual table, stealing pieces of her with my pencil.

A guitarist is in the corner playing.

At first he is playing for her…his fingers conjure up abstractions which encapsulates something that could make one happy to be blue.

She is forgotten, now he plays for himself.

Her change on the counter, the cymbal fall, the end of a song.

I hold two fingers up to the bartender. He has never cared about busy versus dead nights so long as he sees the familiar faces of regulars over the course of the week.

We Klink our glasses.

I see him look at my sketchpad. Without hesitation I hand it to him to inspect.

He had originally wanted to be a poet using language and words as to convey the emotions which are now brought forth via his fingers. Words to make people feel.

I had wanted to, in my youth be a musician .

We had both found our way, just not in the manner originally envisioned. 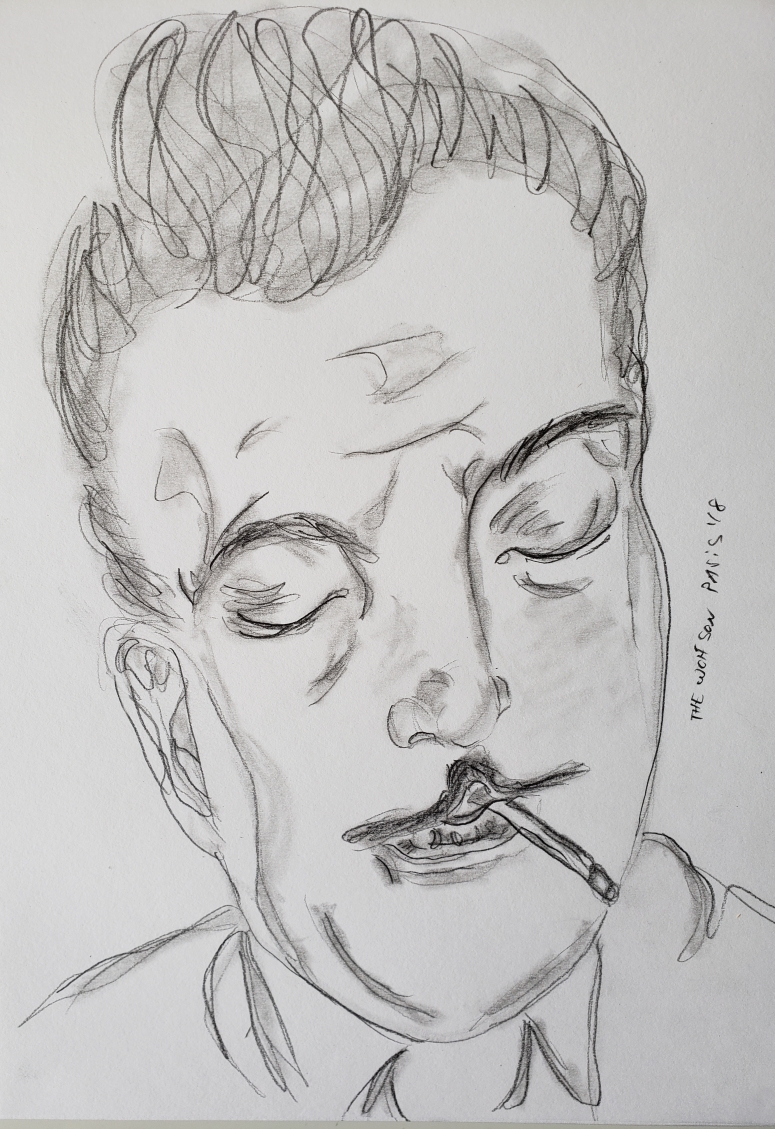 Cecil Taylor 1929-2018
His was such a singular voice. Despite how new and unique his work, he was also incorporating aspects of Western modern classical tradition and forward thinking jazz composer/musicians (who also worked at times off a classical template) such as Duke Ellington.

He also drew into himself for inspiration sources outside of music such as poetry and architecture.

I had just done a portrait of Cecil 3-17. In keeping with his outside the box approach, i decided to honor him w/sculpture.

I have been doing sculptures for years but look on them as a largely private matter.

Mostly it is done to keep the juices flowing, not really with any intent to show or sell them.
Stylistically, they are akin to some of what Cy Twombly & Robert Rauschenberg did. (one part totemic object, one part sort of a chronicle of a moment). There is also a strong improvisational element to my sculptures. I use what is around and what speaks to me with no pre plan.
Viva Cecil April 6,2018 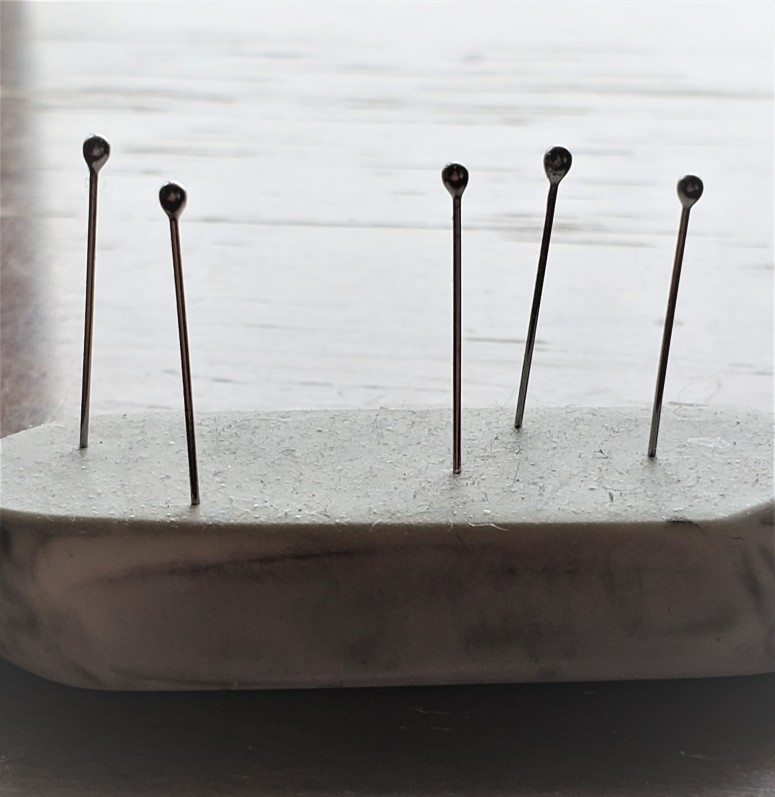 Music is my main source of inspiration. I do not limit myself in regards to what I listen to. There are some definite favorites but I am constantly exploring, pulling new things towards myself.

There is the desire to always be evolving as an artist, I want my voice to be recognizable but I do not want mere mannerisms. Aside from challenging myself in what & how I work, expanding what I listen to is another part of my method. I do not embrace something only to down the line drop it for something newer to me but rather use favorites as navigational points into where else to explore.

Stravinsky has led me to Witold Lutoslawski (1913-1994). I instantly enjoyed everything i heard by him. Like some of my other favorite composers, it is not something I can put on at just any time but when I do put it on it deeply resonates with me.

When I do a portrait of a musician or composer, it is interesting to consider if, someone viewing the piece not familiar w/the subject would see it in a different way than someone who knows their work.